Between 5% and 15% of babies have an adverse reaction to cow’s milk protein. Symptoms include vomiting and diarrhoea which normally occur between 45 min and 20 hours after ingesting the protein. Whilst there is a genetic link, Cow’s Milk Protein Allergy (CMPA) is significantly rare in exclusively breastfed babies (0.5%). This might be related to the fact that the level of the protein present in breast milk is 100 000 times lower than that in cow’s milk. An exclusively breastfed baby would need to be a very unlucky to develop CMPA.

Unfortunately, Noah was one such baby. When he started displaying the symptoms of CMPA, what did health professionals do? They pressured his mother to switch to formula! – a substance that would make him gravely ill! This is his story:

“Noah didn’t really want to feed for the first 24hrs. He latched well but would stop feeding after a minute. The hospital staff were useless but luckily, after a lot of perseverance, we were off on our BF journey. The next week was easy, no cracked nipples, plenty of milk and a happy baby. Sadly, the easy ride didn’t last. On Day 7 breast refusal started. Noah hadn’t had a bottle or dummy to confuse him yet he did not want to feed. This would happen on and off a few times a week. I felt devastated and completely useless. Breastfeeding was the only thing that only I could do. My partner and mum would be doing a lot of the baby-care when I went back to work; I wanted something just I could do.

Then Noah started being sick, initially just small spit ups, then full feeds. By 5wks he was constantly screaming, being sick all the time and never sleeping for longer than 20mins. As I was going back to work part-time at 6wks, full-time at 11wks, we started offering a formula feed a day at 5wks. Initially all was ok, but then 3 days in Noah couldn’t keep any food down and had liquid green poo that stank of vinegar. This prompted the first hospital visit. No one watched me feed or asked anything about my family history. They just declared it was a tummy bug and sent us home. Noah was feeding constantly, he’d start a feed then stop almost instantly, screaming all the time but rooting for another feed. He also refused to latch properly and would only nipple feed. My mum and the doctors just kept telling me to switch to formula feeding.

They sent me to a breastfeeding clinic. The midwife at the clinic told me that my problems were because I didn’t have enough milk, and my son was getting frustrated. This was total rubbish as I could pump at least 16oz over three pumping sessions.

At this stage I hit the internet and through some research realised my son had reflux and probably Cow’s Milk Protein Allergy (CMPA). As babies, my dad, myself and my cousin all had symptoms which we now realise were CMPA, and now my boy had them too! Apparently, when I was 8wks old I showed the same symptoms and my mum switched me to formula as her sister told her she didn’t have enough milk. I was so sick after each feed that she fed me over the sink! At 4 months she weaned me straight onto solids and I haven’t had liquid milk since; just the idea makes me feel sick. When Noah showed the same symptoms, my mum just thought this was normal and that I was suffering PND. It was when she had him for a morning she realised how bad he was. When we went to the hospital I said in the car “either Noah gets some meds or I do! Something is wrong”. Unfortunately the doctors just wouldn’t listen, kept pushing formula and refused to give more than gaviscon. I am a vet, it was only when I told them I would get struck off if I treated an animal the way they treated my son that anyone listened! We eventually got omeprazole and domperidone and I went dairy and soya free. It was really hard initially, eating out was awful. This is where my mum was a total trooper. She was a catering teacher and she made me icecream and all sorts of puddings with almond or coconut milk and pure dairy free spread. The change yo my diet made a huge difference, and the doctors accepted that Noah had CMPA. He was symptom free off dairy and symptoms would instantly return if we offer dairy (the gold standard test is exclusion then reintroduction). Prescription formula was suggested – repeatedly, mainly by healthcare professionals (they like things they can measure and control). I ignored them.

However we still weren’t home and dry. My nipples and my confidence in breastfeeding were shredded but I didn’t want to give up. I have a very fast letdown which doesn’t help reflux; Noah learnt if he only nipple fed instead of latching properly he could slow it down. Yet formula was literally poison for my baby due to the dairy so we had to sort this.

I found the number of a lactation consultant via Google and I’m so glad we went to see her. She helped me get confidence in my body and my baby and made me realise it wasn’t my milk Noah was rejecting. Ironically she works for my local NHS health trust but not a single medical professional thought of referring us to her.

We managed to breastfeed dairy-free until Noah self weaned at 18m, earlier than I would have liked but he was ready. My message to mothers dealing with CMPA is – don’t let the doctors fob you off, especially when they tell you to use formula. Get support and accept that routines etc are not possible when your day is ruled by reflux and CMPA. To be honest, I find it a little odd when mothers don’t breastfeed. With animals, we think it’s a disaster to have to bottle feed their young and we accept they won’t do as well as those fed by mum.” 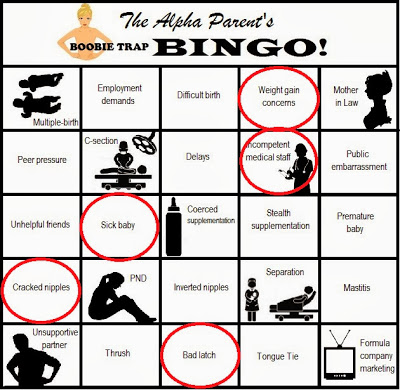