Babies are the largest group of victims on the planet. Don’t believe me? Infants aged under one year are more at risk of being killed at the hands of another person than any other age group (Source: NSPCC 2014). You only have to compare the length of prison sentences handed to paedophiles and child abusers with those guilty of fraud to see what little value we attribute to children. It’s important to recognise however that ‘harm’ isn’t limited to such legal definitions. By restricting our understanding of harm to just the extremes, we condone and normalise other harmful acts towards children, acts that fall outside the legal safety-net. In this post I will focus on babies and toddlers to show how the mistreatment of children is a widely accepted and even cherished part of our culture.
The burden to justify harming children lies on those who wish to conduct it, and justify they do. Each society usually has a list of the types of people who can be ‘justifiably’ mistreated because they are supposed to be inferior, unworthy, unimportant. Animals have traditionally been afforded this inferior status. However, even in so-called developed societies like the U.S. and U.K, young children are routinely denied even the most basic legal protection from harm. In some circumstances, inanimate objects and corporations have more legal rights than children! Consider the following legal and social realities:
Even limiting the statistics to just the USA and the UK, the figures of babies being subjected to the above run into billions. So those engaging in such behaviour better be sure they’re doing the right thing – that they have adequate moral justification ready to defend their actions. With regard to many of these acts, the defence is that most people do it at some point, so it must be reasonably normal or acceptable. In other words, the implication is that, since most people formula feed or spank for instance, the criterion for labelling it ‘bad’ is in need of revision. The crass rationale for such viewpoints can be conceptualised into five common justifications: 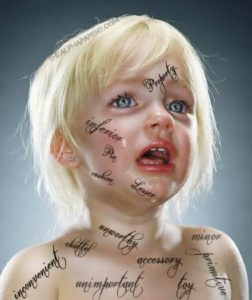 So, how can such stealth-contempt towards babies be justified? One line of reasoning is that we exchange respect only with other rational agents. In so far as we are taught moral concern for others, such concern is cogent only on the presumption that others have subjective experiences. In order to make their behaviour more morally palatable and to evade their guilt, some parents deny that babies are capable of having subjective experience. Babies, they argue, are an underdeveloped chaotic bundle of reflexes and needs. In a word, they are automata. They lack the ability to experience anticipation, have less detailed memories, and no knowledge of what is happening. During infancy, their emotional and intellectual awareness and their perspective on the world are less than those of (for example) an adult chimp. As they aren’t rational, it is argued that babies have no moral status of their own and so do not require the same level of respect. This line of logic is called Kantian reasoning. It is of course, flawed. Clearly, common sense and ordinary language have traditionally extended the presumption of subjectivity to babies, “Happy Mom- Happy Baby” being an obvious example. Anyone who has spent any length of time observing an infant can see that babies are actors who choose what to do rather than being objects totally dependent on outside influences, although their choices may be constrained to narrow limits. A baby’s brain works at the same speed as a child’s brain. The connections function as rapidly as they ever will. Indeed, babies have more cognitive skills than we used to think. The difference between babies and adults is the content of cognition rather than the strength of it.
Furthermore, non-rational humans, such as the insane or brain damaged, are still given protection from unnecessary pain and discomfort, so why not babies? Also consider the possibility that babies may in fact suffer more because of their more limited understanding. Arguing that babies are irrational and thus, unreasonable, implies that adults are reasonable. If so, one of the advantages of being ‘reasonable’ is clearly that one can find a reason for whatever one wants do to.

Babies cannot articulate the consequences that maltreatment has on them. This fact of infancy provokes and facilitates the denialism of their caretakers concerning the existence and observability of infant mental states. Harm becomes more palatable when it is shrouded in speculation. Is pain felt by a baby less important than pain felt by an adult, simply because it cannot be articulated? Our society seems to think so. We can slice the skin from newborns and pierce holes in their bodies – both in the name of vanity. We can use restraint if necessary. There will be no legal consequence. Viewing children as property is a social mindset which dates back to medieval times, yet the assertion that parents have possession of their children as chattel stubbornly persists into the current day. When the desires of the parent collide with the needs of their child, the parent may act in their own, rather than their child’s best interests, even if the child’s interests are far more weighty. Take for example, the piercing of babies’ ears. In this scenario, a major interest of the baby, namely the avoidance of pain and permanent scarring, is sacrificed for a minor interest of the parent, namely having their child look a certain way. The same factors apply to non-medical circumcision. It’s the flip-side of healthy parenting: instead of the parent meeting the needs of the child, the child is meeting the needs of the parent. I find it extraordinary that animal rights activists managed to achieve extreme legal limits on tail docking, but it is still fine to mutilate a child for no actual medical reason. I argue that the whole crux of human rights philosophy rests upon the assumption that simply being a human generates inherent value. The very meaning of inherent value is that you shouldn’t be treated as a mere resource for others.
As another example, take the issue of spanking. A common belief is that children need discipline, that punishment is an acceptable strategy, and that under stress parents may engage in aggression. Certainly, in most countries in contemporary society, spanking one’s child is legal and in some communities, even encouraged. However to spank anotherparent’s child is an offence risking imprisonment. It’s not difficult to see the property-centred undercurrent here: a parent spanking their toddler is within the remit of the law. However if the same parent were to spank their neighbour’s toddler in the exact same fashion, this would be grossly illegal. In this latter scenario, the wrong is deemed to be done to the neighbour, not the toddler. The toddler itself doesn’t matter morally, only the toddler as property. At the core of this ethical dichotomy is strategic denial: maltreatment of individuals who are regarded in proprietary terms is less apt to arouse self-reproof than if they are seen as human beings with dignifying qualities. Many acts which are precarious for babies also provide benefits to adults. Take formula feeding for example. Now that formula feeding has become a major part of social and economic activity, we have both an ideological and a vested interest in perpetuating blindness to the morality of its use. Even so-called ‘experts’ are apt to neglect the primacy of babies’ needs in this domain. Miriam Stoppard, in her ‘Complete Baby and Childcare’ manual, asserts that: “Feeding takes a great deal of a parent’s time, so it’s important to choose a method that it suitable for both parent and baby” (Stoppard 2008). Imagine how ludicrous this attitude would be if applied to other areas of child heath:  “Preparing meals for your child takes a great deal of time, so choose microwave ready-meals instead”, or “Visiting the doctor takes a great deal of time, so when your child is ill, use Google instead”.
On a macrolevel, there is little economic and social opposition to ignoring the risks that formula use poses to babies. Convenience and ideology go hand in hand, and both are unchecked by morality and common sense. The interests of the world’s most vulnerable people – babies – are not a part of the economic equation. Free-market global capitalism prioritizes profit over well-being. Consideration of babies’ interests is an inconvenient distraction from the important business of making money. The free-market obsession with the ‘bottom line’ has resulted in a basic devaluation of all life on the planet, including the future of human life.

Some argue that pain felt by a baby is not as bad as pain felt by an adult. This argument is commonly used by circumcision advocates that believe in conducting the procedure without anaesthetics. They argue that babies have a much weaker awareness of what is happening to them, and this makes their suffering insignificant. It is, of course, arbitrary and incoherent, given the theories and information current in science, to rule out mentation for babies, particularly such a basic, well-observed mental state as pain. To experience pain, both a well-developed prefrontal cortex and a right neocortical hemisphere are needed. And what would you know, babies have both of these components! It has long been thought that these parts of the brain are functionally silent during infancy (first year of life), and until recently, little was known about their role in the early development of cognition. However an emerging body of recent neuroimaging research has provided evidence the parts of the brain responsible for experiencing pain exhibit functional activation much earlier than previously thought, indeed – right from birth (Shulha 2013; Grossman 2013; Kida and Shinohara 2013; Blasi et al 2011). What’s more, denial of pain consciousness in babies is incompatible not only with neurophysiology, but with what can be extrapolated from evolutionary theory as well. Evolution preserves and perpetuates successful biological systems. It strains credibility to suggest that the experience of pain suddenly emerges at a certain age. Human pain machinery is the same in infants as it is in children and adults.
The true question is not, Can they reason? Can they talk? But Can they suffer? Answer: Undoubtedly. Why has common sense and the legal system studiously avoided coming to grips with our moral obligations to babies? For that matter, why has philosophy and theology, which have notoriously concerned themselves with all sorts of questions and which has explored all aspects of ethical theory, been virtually blind to questions concerning babies once they emerge from the womb? How can we deny the most vulnerable humans basic human rights and, in the same breath, claim to be a civilised society?
Perhaps part of the answer lies in the fact that manipulating babies to suit our purposes without consideration of their interests is so pervasive, that it has become invisible to us, in much the same way that exploitation of women and minorities was invisible for too long.
The fact that adults are willing to subject their infants to unnecessary suffering suggests that we need to fundamentally reappraise our relationship with our young. The capacities of babies to experience pain, to have a sense of consciousness embedded with cognitive abilities, and to have emotional lives should be given credence. The rights of children ought to come before the desires of adults.
Dignity, respect, and caring should knit together a social fabric that clothes all who are dependent upon the powerful. In principle and in fact, utilitarianism demands that babies have equal moral consideration to adults. We can start this process by opening our eyes and hearts to the rights of babies to dignity and caring.